The rains are a much-needed respite from the sweltering heat and humidity of the summer season. Go for a long drive when it’s pouring and you see several roadside bhutta vendors peddling roasted corn on the cob rubbed with red chilli powder, salt, and lemon juice. Once charred, the corn has a nice smoky flavor which goes well with the rainy weather and soothing petrichor. Juicy, buttery, boiled corn, corn bhel and corn bhajiyas are among other delicacies sold at streetside stalls during the rainy season. However, why limit yourself to these predictable basics when there is a lot more you can do with corn as an ingredient?

Corn and rains – a match made in heaven

Corn is relative to the monsoons because of several reasons. “Corn is mainly consumed during the rainy season because it grows around this season. The ease of preparation is another factor,” says Chef Niyati Rao, Head Chef & Partner, EKAA. A lot of our seasons and food are interlinked due to health benefits and corn is no different! “During the rains and humid weather, bacteria and other viruses spread faster and the beta carotene in corn helps prevent infections,” explains Chef Vidushi Sharma, Owner and Chef at Mensho Tokyo, Delhi. The inclusion of corn in festive-special recipes like Rushichi Bhaji has also played a major role in the popularity of corn during the monsoons. “Rushichi Bhaji is prepared with seasonal vegetables like sweetcorn and tubers like colocasia leaves, red amaranth leaves, raw banana, sweet potato, red pumpkin, green peas etc. Consumed on Rishi Panchami which falls in September, this dish symbolizes the simple cooking practices of the rishis (sages) back in time,” says Chef Gautam Mehrishi.

The versatility of the golden-yellow kernels 
Corn is one of the most versatile ingredients and comes under the spotlight in the monsoons. Mehrishi believes that since the Portuguese introduced corn to our country, it has developed as a popular ingredient in Indian cuisine. Moreover, chefs around the globe have enjoyed cooking with corn. “Corn can adapt to both traditional and modern tastes and textures,” says Mehrishi. Corn can be used in so many different ways and forms. It can be used in both sweet and savory dishes. “Think rich and luscious Bhutte Ka Halwa, Bhutte Ka Khees which is popular street food in Indore, the warm and comforting Sweet Corn Soup, easy-to-prepare corn chillas, tortilla chips, cornmeal, corn jams and marmalades, creamy corn sauce and more.There are countless dishes one can prepare with corn.Incorporate corn in kebabs, fritters, tikkis, chaats, koftas, curries, pulao, samosas, sandwiches, bruschettas, tacos, salads, and pasta, polenta, and more,” says Chef Reetu Uday Kugaji. Corn can be made into popcorn and corn flour and makai ka atta can be used to make rotis as well. “It’s hard to believe that corn isn’t inherently Indian! Originally from Mexico, corn and its many forms show up in Indian cuisine, and due to the slightly sweet creaminess, it takes to most cuisines well. My mom’s special Locho, which is A traditional Gujarati dish, is made using grated corn. A lot of people also drink makai ka shorba in winters as well as monsoons,” says Sharma. Additionally, the entire corn can be used in cooking. “The husks can be used to make tamales, silk to create medicinal tea, kernels for food, and stalks for livestock feed,” Raveena Taurani, Founder of Yogisattva (India’s First Whole Foods Plant Based Culinary Academy). Corn silk that we have been discarding for years is an ancient remedy. For ages, corn silk tea has been used as a naturally potent diuretic agent, which helps to flush out excess water and waste from the body, thus reducing the inches dramatically. It also keeps kidney stones at bay and regulates blood sugar levels. 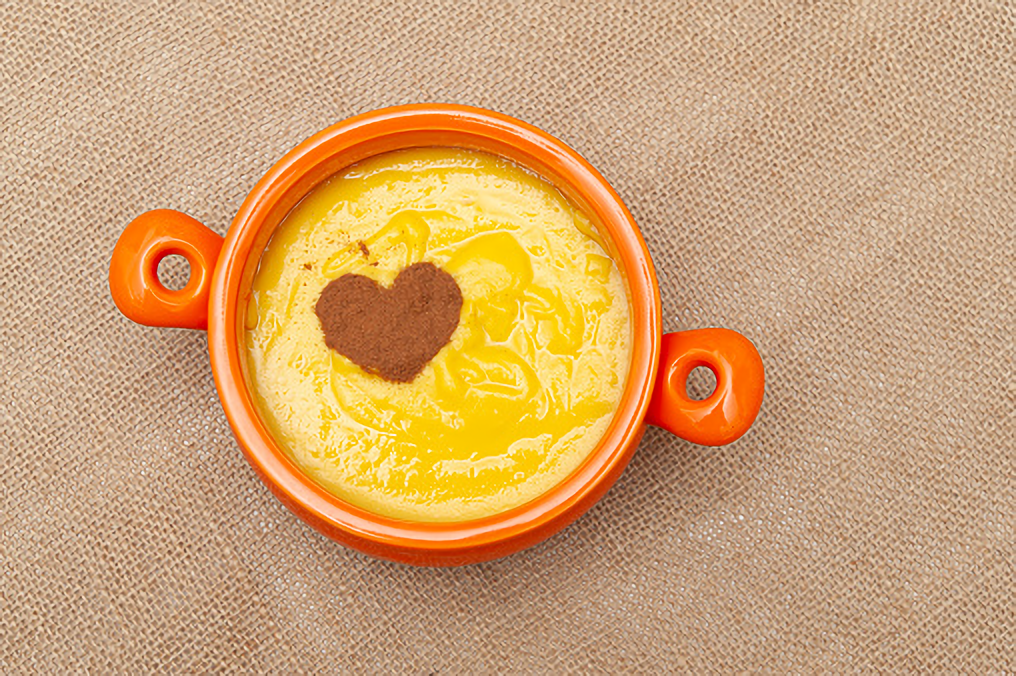 Considering that corn is such a versatile ingredient, it was only a matter of time before chefs realized how it can be incorporated in several ways. “We make corn gel. We take the juice of the corn and keep boiling it until it becomes a super starchy and supple mixture, which goes with our chicken dish. We also make use of young corn which comes from Nashik. And this comes with its tiny husk. We serve this with garlic crisps, some homemade gochujang, and soy mayo. It is a warm, enjoyable dish and one of our best-selling supper dishes,” says Rao. New age chefs are using corn in cocktails, coffee, appetisers, main courses, desserts and more. “Corn is a fun ingredient to work with because of the grain’s texture, colour, viscosity, adaptability and chemical configuration. The high content of starch allows you to play with it in making transparent glass chips or forming foam with the milk. It can be a star ingredient in any recipe,” says Mehrishi. Sharma says her favorite corn pudding is light and airy with a velvety corn mousse without being overpowering. “I have grown up eating corn in various dishes. Corn can add so much character to a basic veggie soup or stir fry. A corn salsa makes for a lovely party dip. Due to its mild flavour, corn is a perfect canvas to experiment with These days, I enjoy roasted corn strips tossed in Korean chilli paste,” Sharma adds. 
Bhutta Coffee is a rage this season. “When it comes to enjoying a bhutta in the monsoons, it’s not just about eating corn but also about the wet smell of the soil and the cool breeze. We have tried to replicate this experience by adding the smokiness of bhutta to a cup of coffee “Our bhutta coffee is an espresso shot with cinnamon, orange zest and honey. A piece of smoked bhutta is fixed on the rim of the glass so that you take in the aroma of the bhutta every time you sip your coffee,” says Binny Varghese , Barista consultant, Ghalib and Company, Surat.

QUICK TIPS FOR COOKING WITH CORN Avocado & Corn Boat Salad with a Cumin Dressing by Yogisattva


1. Don’t remove the husk from the corn until you want to cook it. The husk makes for a protective shield in keeping the corn moist, sweet, and juicy.
2. Don’t leave corn in the fridge for long. It could turn dry.
3. Always purchase and consume corn when it is in season.
4. If you want to use corn minus its sweetness, use white Indian corn.
5. When making corn desserts, do not cook corn with too much sugar. Use alternatives like jaggery or palm sugar.
6. Avoid buying corn from supermarkets. Instead, opt for freshly-harvested corn from vegetable vendors. 7. Even after you’ve removed the corn kernels, the cobb can be used in vegetable stock. It can be dried and used as a burning agent for smoking vegetables and meats.
8. Make sure to never overcook corn. Overboiling makes it mushy and overroasting makes it bitter.


– It’s rich in soluble fiber which helps regulate blood sugar levels. It is rich in magnesium, potassium and vitamin B.
– It’s rich in vitamin C and antioxidants due to the yellow pigment called beta carotene.
– The main difference between white and yellow corn is the pigment and calorie content. Yellow corn has beta carotene and is lower in calories and carbs as compared to white corn. However, the taste has nothing to do with the colour.
-It can curb appetite being high in fiber but remember not to combine it with other carbs as insulin spikes will be higher and this can hamper your weight loss efforts. Diabetics must limit their corn consumption.
– Chew corn kernels well. As corn is rich in cellulose, it needs enough mastication (chewing) to break down the cellulose. This makes it unsuitable for people with poor gut health. 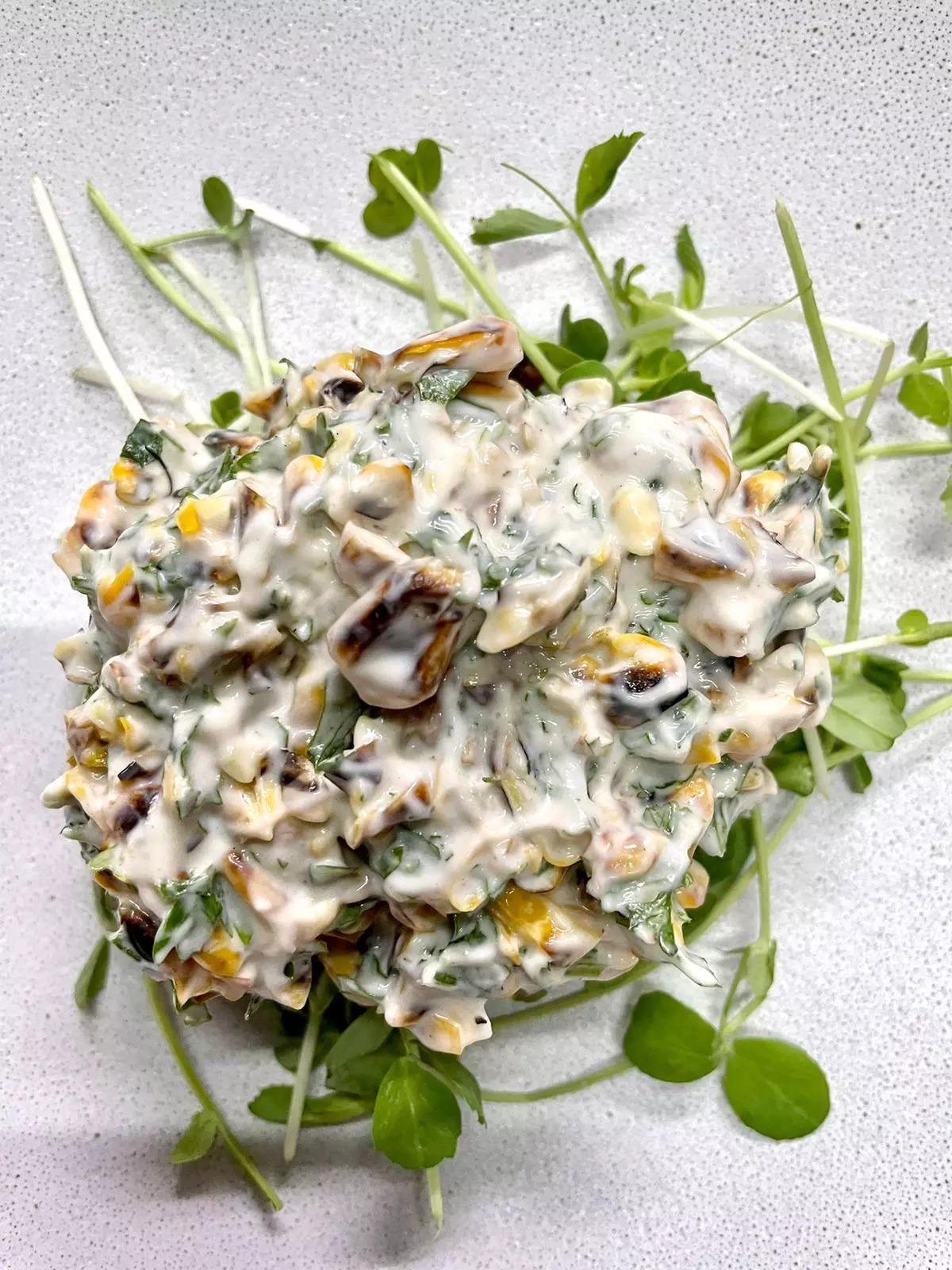 
1. Char the corn over charcoal, apply lemon juice and leave aside.
2. Remove jalapeño chillies from the brine and keep both separate
3. In a mixer grinder, add in the charred corn, mayonnaise, jalapeños, parsley, salt to taste, and the brine water for consistency as required
4. Grinder it until nice and coarse
5. Can be served with any fried dish like panko-crusted fish/prawns, chicken popcorn, buffalo chicken wings, etc.