Sometimes you crave something sweet. Austin Allan knows this and is ready to satisfy your craving with his bakery Sugar Wood. The new NYC-located bakery (on 157 Prince Street) is offering up NSFW waffles that are sure to leave you in a good mood. Sugar Wood’s collection of naughty sweet treats are as Instagram-worthy as they are delicious.

Sugar Wood’s signature desserts are the Kitty, a vagina-shaped waffle, and the Woody, a penis-shaped waffle, both of which you cover in chocolate, peanut butter, caramel, white chocolate, or strawberry. So whether you want a Woody, a Kitty, or both, there’s something delectable for everyone.

Allan is an entrepreneur with a marketing background who’s looking to change the way we engage with sex, genitalia, and identity through food, but from a queer lens. INTO spoke with Allan about Sugar Wood’s delicious products, the TikTok about Sugar Wood from social media influencer Rob Anderson that went viral, and how Sugar Wood is supporting the LGBTQ community through partnering with The Phluid Foundation.

What was the inspiration behind Sugar Wood?

Just in my background as an entrepreneur, I see a lot of products, and I read a lot of newsletters and publications. I noticed that there were a lot of products and stores that were doing sort of penis and vagina-shaped products.

I’ve seen a bakery in Paris that has baguettes that are shaped like penises, and I’ve seen a vineyard in Napa Valley that was doing wine in a penis shaped bottle. And to be honest, I’ve also seen stores all over the world doing penis-shaped waffles and vagina-shaped waffles. So I thought there’s a reason why all these are successful because people get a kick out of it.

So, I wanted us to start with the waffles and really develop a brand that was New York specific and queer specific as well. And so that’s how Sugar Wood was born.

Developing Sugar Wood was a very collaborative process. Who all were involved?

We worked with Tom Smallwood for Magnolia Bakery. I met Tom through my partner, who knows him through a gay dodgeball league. We were chatting about [Sugar Wood] last summer and he was like, “Oh my god, I’d love to be involved with this”. He helped us create recipes that we were able to make really quickly, but also truly deliver our flavor. So he did the waffles and all the sauces as well.

We partnered with Braulio Amado, who’s a very in demand graphic designer. He works on a lot of album covers. The photo wall was his take on that classic New York restaurant with the photo wall of all the famous people that have been there, but giving a little more of an edge to it and making it very Sugar Wood.

The other is The Phluid Foundation. One of our partners is David Artaviathe former editor-in-chief of Out Magazine. He was helping us with outreach to the community and helped us look at a bunch of different LGBTQ nonprofits and Phluid was the one that was just the most excited to work with us.

I came out when I was 15. I’ve been out for a very long time and it’s always been very important to me to give back to the community. I think back to marriage equality and how I knew a lot of people at the National LGBTQ Task Force and they talked a lot about building bridges to other communities. I feel like a lot of what I do in marketing is building communities around brands.

So it was a no brainer for me to sort of make this a brand that would give back to the LGBTQ community. It’s super important to me because obviously we want to have fun and we want to be lighthearted, but we want to give back. 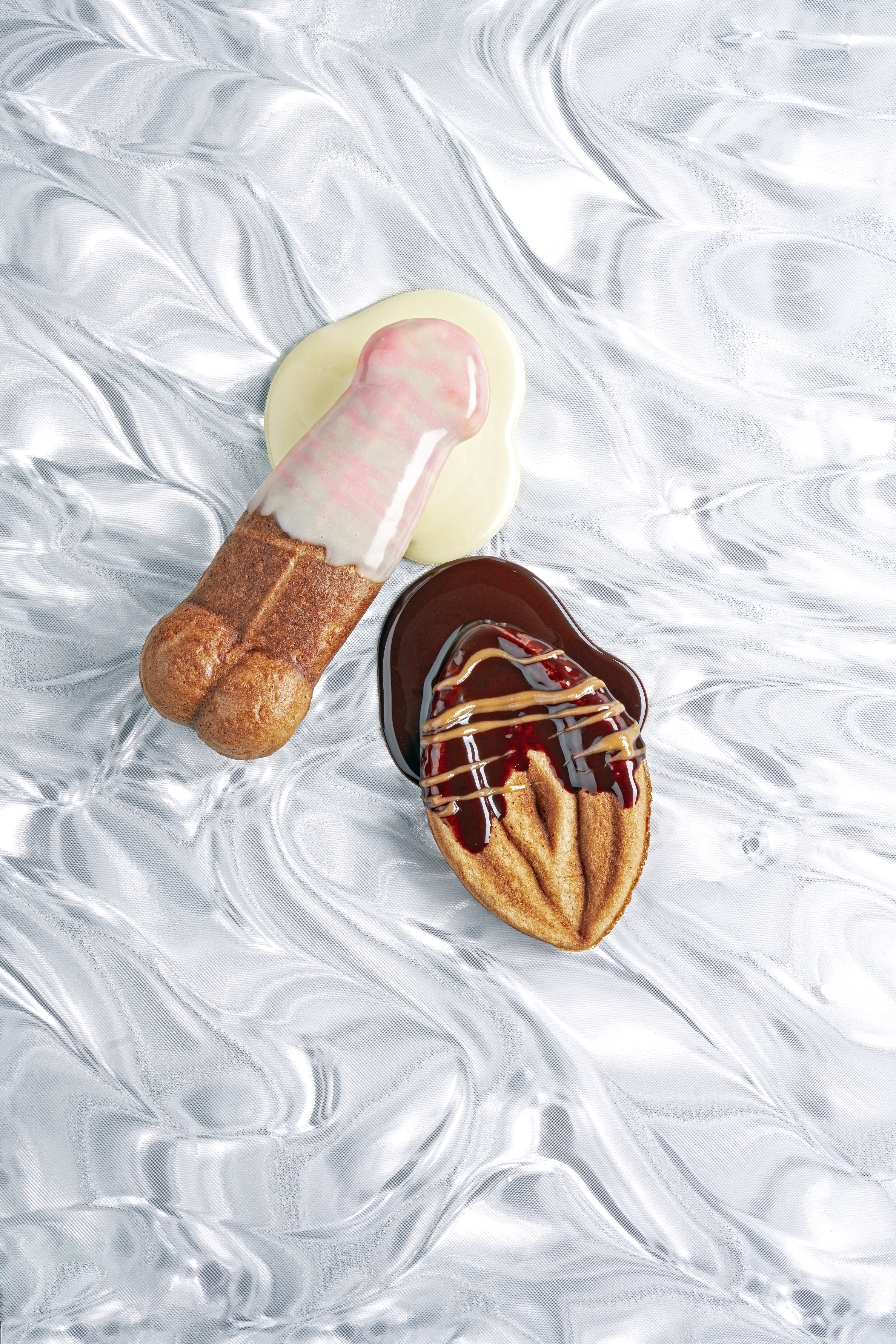 What is the Sugar Wood experience?

The products, they’re intended to be silly and lighthearted. They’re not intended to be pornographic or disgusting or vulgar. We really want people to have a fun experience when they come in. So it’s not just a product, but an experience.

The experience starts when they get to see the photos or if they get to see the mural. Then when they get to the cashier, the cashier will take their order, but make jokes. They say, “What would you like today? We have Woodies and Kitties”. Then as they’re thinking, we say things like, “Whichever one you pick, we won’t tell”. Or somebody says, “I’ll take a Woody” and I’ve said to many people, “Oh, you’re a man after my own heart” or “Do you think you can handle it? It’s pretty big”.

Then they come over here and the second employee at the sauce station will continue the show to make them laugh. So questions like, “How deep do you want it?” While they’re dipping it in the sauce. Things like the “P and BJ”, which is really funny. It’s not officially on our menu, but it’s definitely a joke that we use a lot.

The next part of the experience is the product itself. We want the product to actually be delicious because we felt like people came in for the controversy about it or the silly nature of it. But if the product didn’t deliver, they wouldn’t tell their friends. They wouldn’t post it on social media.

Then we have merchandise. Just like the waffles, it’s intended to sort of destigmatize sex or talk about sex or genitalia, if you will, but also be cool, right? So the merchandise is actually all the interiors with the exception of the mural. We’re also designed by a queer design collective in Bushwick. Obviously we chose big t-shirts and we chose crop tops. So I think this is a subtle wink to the LGBTQ community, but definitely not your typical billboard t-shirt.

And then the final part of the experience is the “Sugar Wall”. So that is a slight homage to the Sheena Easton song”Sugar Walls”, but also we thought it was just a funny name for our selfie wall. People love to take pictures. They can take a picture with the giant penis, or they can just take a picture of themselves and have that as a background because why not?

And then also not doing any harm to the planet. We don’t do anything with plastics, which is not like something that we want to be preachy about and put up a whole billboard somewhere, but we do want to let people know that we’re really considering that.

I absolutely love when I’m here and I’m working with customers, just making people laugh and seeing people smile and then seeing them post pictures on social media. That’s exactly what we’re doing this for. 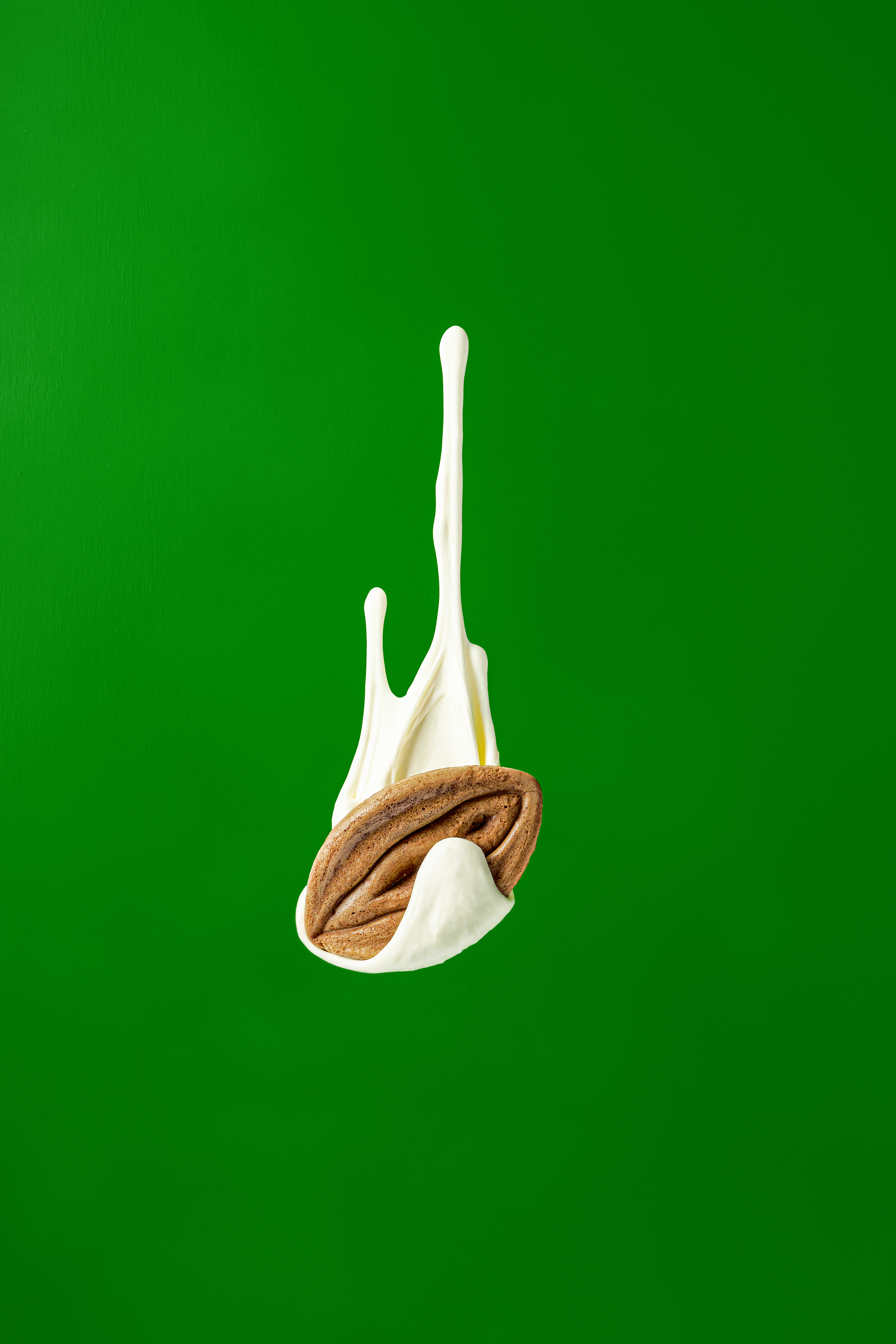 What have been some of your favorite reactions that you’ve received or seen from customers, from you or from your staff?

The first one that surprises me just a little bit is when people take a bite and they go, “Oh, that’s actually delicious”. They aren’t expecting it to be that good. They just think it’s a gag or it’s a joke. And so that really pleases me because we’ve exceeded their expectations. Even if it tells you that they have low expectations, we exceeded our expectations and that makes me really happy.

Any new flavors coming down the pipeline?

We haven’t worked on that just yet, but there’s a ton of options, right? We really wanted to think about sort of typical “American” flavors that are almost nostalgic. So that’s why we started with peanut butter. But I think marshmallow is probably in our future, maple syrup or some sort of maple sauce in the future as well.

I love these waffles. I think they taste great. So we probably wouldn’t look to switch up the flavor of the waffle. 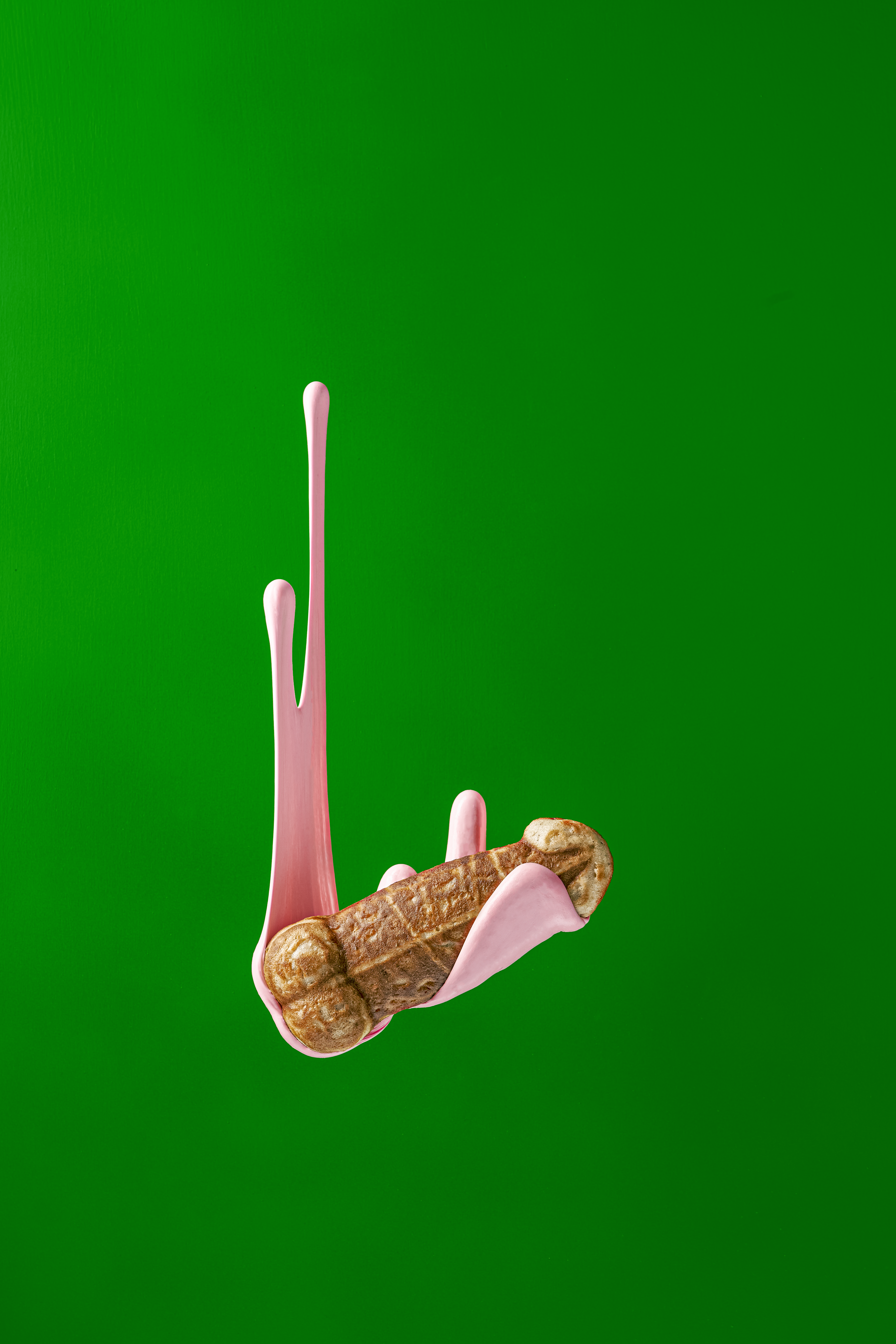 Social media influencer Rob Anderson made a viral TikTok about Sugar Wood. Any collaborations with more queer influencers coming down the pipeline?

We’d love to work with everyone in the pipeline. None that are confirmed right this second, but we are reaching out to influencers that we love. That’s sort of how we got Rob Anderson. I love the gay science videos. They’re really good. I’ve watched “why do gay men choose difficult vacations” 500 times. I just think he’s hilarious, and the Sugar Wood video was so good, and right now we’re at 800,000 plus views.

So it definitely did what we wanted it to do, which was put us on the map. And I think that as we reach out to other influencers, what I’ve been saying is, “Look at this. We can help you create really great content for your own page.” So I think it’ll be a great partnership with whoever we work with because our products are so eye-catching and the content will be so engaging.

What do you hope for the future of Sugar Wood?

We want to grow into a nationwide brand or at least in major cities. We’re looking at opening in Las Vegas and then in other cities where there’s a lot of tourists, like Nashville, New Orleans, and Los Angeles.

And then we are looking to sort of expand our social justice and giving back platform. So looking at other organizations besides Phluid to work with because we feel like there will be enough to go around.